Most founders in tech will tell you that they're a contrarian

If you're looking for a big win you first have to find something that has high uncertainty.

For example, there's high uncertainty around when VR will become mainstream.

Right now, it's unlikely that in one year going around with VR goggles will be as common as wearing a face mask.

Someone might be able to change this and make VR go mainstream. But the only way to get this conviction is building a different model of seeing the world.

The models you can build can be either coherent or incoherent

A coherent model of the world is either right or wrong.

An incoherent view of the world doesn't help us to make any predictions, so it's useless.

Following the global consensus view all the time is incoherent and messy. It also does not make us realise that we were right or wrong about things. This is bad for coming up with convincing world changing ideas, because if you don't model and predict you can't fine tune on reality.

The global consensus is not a rigorous model of reality. It's like following the present feeling of reality.

Alternatively, building a model of reality is like an undiversified, high-volatility bet. You can be left with nothing if any of the initial axioms of the model are wrong.

If our preference was trying to be right most of the time, the models we'd build would be very diversified models.

But we know that individuals find being contrarian rewarding.

The returns of an outlier outcome are bigger than the many small wins. We're also assuming that every win feels the same for people (homogenous preference)

The fun of being contrarian though is not that you’re right most of the time. The reward is that on one bet you were right and seven billion people were wrong.

So going all-in and winning has enough returns to pay for all the lost bets. One big win is more rewarding than a more diversified portfolio of small low risk wins and losses.

Society as a whole benefits from contrarians. Contrarians take the risk of their crazy beliefs and if they're wrong they pay for the consequences.

If they’re right, it’s informative for everyone. They collapse the uncertainty around whether some belief is only right in theory or effective in practice.

When that belief is a business idea, it's worth billions of dollars and it can change the world.

Now let's go deeper, an individual, is it worth it to be a contrarian?

We know that accepting the consensus view is accepting someone else's compromise. And that it doesn't help us improve our understanding of the world

We know it's more informative to build models from first principles. As it creates a feedback loop between our understanding of reality and reality.

Reasoning from first principles, which leads to being contrarian is sound.

There probably are coherent rules you can use to live a better life.

To get the high reward there's high risk of being wrong.

Can we do better?

We can reverse engineer everyone's model of reality. Doing this we figure out the first principles they accept (implicitly). Then we can cherry pick what they're wrong about.

Once we find something everyone is wrong about we can act upon that insight.

Here's some things most people in my generation implicitly believe in:

These sound kind of dumb when you write them out. Even if some are arguably true, you’d expect a good argument.

Being low-risk contrarian means picking a handful of these and articulating a plausible alternative and living by it.

This gets most of the benefits of being contrarian, at a fraction of the risk 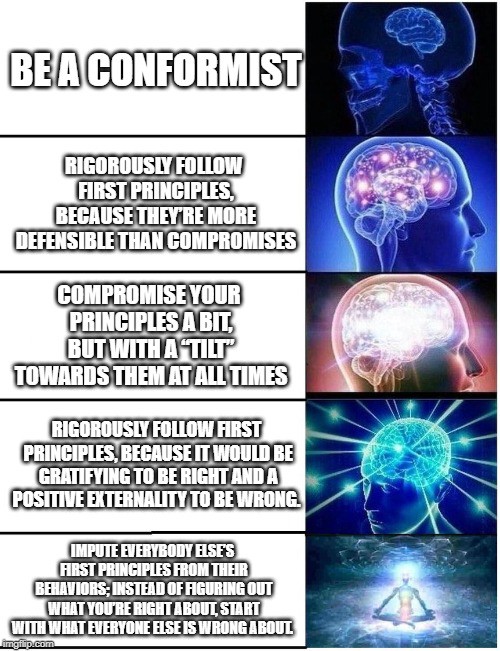 Inspired by this blog post and a conversation with Gleb Posobin